Since 1900, there have been 11 full decades.  If we do the math, that’s eight position players, a designated hitter, starting pitcher and a closer.  This equals 11 players for our All-Time MLB Team.  However, there’s a catch.  Each decade can only have one representative and the said player must have ranked to be among the best players of their given decade.  For example, Willie Mays may have played in the 1970s, but he wasn’t a productive player in that decade.

Here is the team in chronological order:

1900-1909: Honus Wagner, SS, Pittsburgh Pirates – This was the easiest pick to make.  Wagner was the best player of the first decade of the 20th century and he did this at a position where you’re not going to see numbers like this again until the likes of Alex Rodriguez start juicing themselves up with steroids.  Wagner won six batting titles during this decade and never failed to steal at least 35 bases.  His worst batting average of the decade was .330, which is a career year for most players in the history of the game.  What’s more, when he “only” hit .330, he still managed to lead the league in runs scored, doubles, RBI, stolen bases, on-base percentage, and slugging percentage.

1910-1919: Ty Cobb, LF, Detroit Tigers – There have been some great left fielders in the history of the game but none of them dominated their position the way Cobb did during this decade.  Sure, others may have more MVP trophies but that’s not the point.  Cobb twice hit over .400 and there was only one season of this decade in which he didn’t lead the league in hitting.  He hit .371 that season.  He also led the league in runs scored and slugging percentage five times and slugging percentage six times during this 10 year span.  The only other possibility was whether to give this decade to Walter Johnson but with all of the offensive cheating frauds in the 1990s I really didn’t want a hitter to represent the last decade of the twentieth century, as even a circus monkey knows that most were on PEDs.

1920-1929: Babe Ruth, RF, New York Yankees – You can’t have an all-time team without Babe Ruth.  Period.  Everyone knows “The Babe” is the greatest player in the history of the sport.  However, the toughest time I had with this list was second base and this decade was the age of Rogers Hornsby, too.  Hornsby is, by far, the greatest second baseman of all-time and it is sad that he can’t be on this team because of the era in which he starred, which coincides with the one Ruth dominated.

1930-1939: Lou Gehrig, 1B, New York Yankees – The greatest first baseman in the history of baseball makes for the perfect choice of this decade.  “All” Gehrig did this time period was to finish in the top five in MVP voting seven consecutive years and hit at least .329 each season until 1938 when he hit .295.  Obviously, his career came to a sad and unexpected halt after appearing in only eight games in 1939.  The Iron Horse seemed to be invincible throughout most of this period.

1950-1959: Mickey Mantle, CF, New York Yankees – If I would have needed a center fielder from the 1960s, the easy choice would have been Willie Mays.  However, I needed to pick one from the fifties and Mantle edges Mays in this decade.  Although both players were fantastic, the slight edge goes to Mantle and his two MVPs (Mays won one), including his Triple Crown 1956 campain when he hit .353 with 52 homers and 130 RBI.  You really couldn’t go wrong with either of these players and I could see myself changing my mind to Mays tomorrow.  This decision was that close.

1960-1969: Pete Rose, 2B, Cincinnati Reds – Although Rose played all over the place and won a Gold Glove in the outfield in 1969, he started his career as a second baseman for the Reds.  Although Hornsby is the greatest ever to play this position, you really can’t argue with the 1963 Rookie of the Year who finished his career with more hits than anyone in the history of the game.  Rose finished in the top 10 in MVP voting during the final six years of the decade, including leading the league in batting average to end the decade when he hit .335 in 1968 and .348 in 1969.  Although Mays (and Aaron) was a better player than Rose during this decade, this was a scenario where second base needed to be filled.  I tinkered with the idea of using Mays from this decade and Jackie Robinson from 1950-1959 but ultimately went with a combination of Mantle/Rose instead due to the fact that Robinson missed the later 1950s, as Rose did in the early 1960s, and the fact that Rose played in more All Star Games in their respective decade and he also finished higher consistently in MVP voting and in years receiving MVP votes.  Overall, it was simply a matter of Rose having the more impressive resume on paper although Robinson and his superior defense in comparison to Rose did make the decision harder.

1970-1979: Johnny Bench, C, Cincinnati Reds – Johnny Bench is aruably the greatest offensive catcher of all-time and arguably the greatest defensive catcher of all-time, too.  With a resume like that, this selection is a no-brainer.  Bench won two MVP awards during this decade and seven of his nine Gold Glove awards during this ten-year span as well.  Bench is to catchers what Babe Ruth is to the game of baseball. 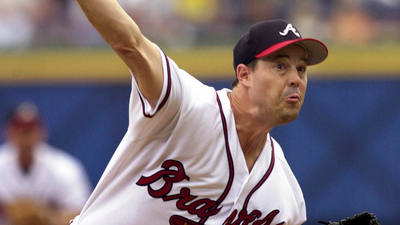 1990-1999: Greg Maddux, SP, Altanta Braves – Welcome to the decade that changed the sport negatively and has forever stained many of its formely sacred records.  If the cancellation of the World Series in 1994 didn’t turn you off, the unethical behavior behind the scenes by way too many in terms of PEDs probably did.  Instead of mistakenly taking a juiced up home run hitter who hit way too many out of the park with illegal help, I’m going to take the professor who could never be the poster boy for PEDs by way of Greg Maddux.  In an era where hitters pulled a Tonya Harding, Richard Nixon, Tiger Woods, Tim Denaghy, or Mike Tyson eating an ear type of dishonesty or unethical behavior, I choose a small pitcher with pinpoint control who made these cheaters look like buffoons.  Maddux won four consecutive Cy Young Awards in the middle of the decade and seven times finished in the top five in voting for that award.  In addition, he finished in the top 13 a total of seven different times in the decade with respect to MVP voting.

2000-2009: Mariano Rivera, CL, New York Yankees – Steroids aren’t allowed in my world, so scratch off Barry Bonds and his inflated fantasyland home runs from this real team of non-cheaters.  Some, like Cobb, may be morons, but at least they are the greatest of the great ball players of all-time.  In a decade of so much deception and lies in terms of who took them and how much it affected their performance, I am going to go with the skinny closer with the cut fastball that doesn’t get better with injections, cream, or whatever else the frauds took in their aim to improve their numbers, inflate their personal salaries, and in their selfish attempt to destroy the game.  Rivera is widely considered to be the greatest closer in the history of baseball and makes for the perfect fit at the end of this list.

All of these players (except Rivera) are in the Baseball Hall of Fame.  I look forward to visiting them on Tour #3 this summer.  Please check it out if you have ever dreamed of going to Cooperstown, in addition to places like Fenway Park, Yankee Stadium, Wrigley Field, etc.  Please contact us if you have any questions.

Here are a the biggest scenarios where I have second guessed this team:

3. I chose Mantle over Mays for the 1950s.  Although Mays had the better career, I think Mantle edges him (barely) during this specific decade.