You are here: Home / News / Impact of Sports in American History

Growing up in the Eighties, I intensely followed football, baseball, basketball, hockey, men’s and women’s tennis and the Olympics. I could keep going but you get the idea.

Little did I know, sports taught more than I ever envisioned in all aspects of life. I remember elementary math class and being ahead of other classmates simply because I could count by 2, 3, 6, and 7, thanks to the increments provided by adding runs, points, field goals, and touchdowns.

While math is dreaded by some, interest would be infinitely heightened if one learned about “Moneyball” or sabermetrics in todays society, whether one aspires to a career in sports, business, or an occupation not yet in existence. According to a U.S. Department of Labor report in 2013, “65 percent of today’s schoolchildren will eventually be employed in jobs that have yet to be created.”  The Moneyball and sabermetrics approach has revolutionized baseball and has been trickling into other sports and the business world.  Many would be well advised to follow the trends of tomorrow, rather than cling to what worked in the past.

I understood world events better. As a seven-year old, the Cold War was not comprehended. The 1980 “Miracle on Ice” changed that perception so it was more understood when news reports talked about the Russians in Afghanistan.

Other examples include asking my Dad why the Philadelphia Eagles and Oakland Raiders were each wearing yellow stripes on the back of their helmets during Super Bowl XV. It was because of the recently released hostages who had been in Iran for 444 days. When you’re young, you don’t care much for world events. But when you have a question about it, you care more.

Looking back, sports has been a model for understanding American History. This is true as the nation entered the Twentieth Century and politics was primarily dominated by white men. While Major League Baseball teams were comprised of white athletes, other groups had role models to look up to for a sense of hope and pride.

Many of the early heavyweight boxing champions had been of Irish descent. Native American Jim Thorpe was generally accepted as the greatest athlete of the first-half of the century.

As the century advanced, people in ethnic communities took to their own heroes. The Jewish community took pride in the baseball exploits of Hank Greenberg and Sandy Koufax. Italians had baseball great Joe DiMaggio and heavyweight boxing champion Rocky Marciano.

African-Americans such as Joe Louis and Jessie Owens did more than simply become role models for people of their color. They were among the first athletes to be embraced by a majority of Americans. Owens was an American racing against and defeating the notion of Adolf Hitler’s aryan superiority in the 1936 Olympics in Berlin. Likewise, Louis represented the United States in the famous Max Schmeling fight of 1938 at Yankee Stadium. Schmeling returned to Germany shunned by the Nazis.

As much as it seemed the world was changing, Louis and Owens still lived in a segregated nation.

World War II forever changed the roles of many people in society.  That is the real story.  It’s not simply because Ted Williams could have hit 700 home runs if he had not lost four years of his career serving in the war.

One of the major turning points in American History involved Jackie Robinson breaking the color barrier in Major League Baseball in a post-World War II nation in 1947. This set the stage for an explosion of racial and and gender integration in sport, as well as continued patriotism and national identity. It advanced to the controversial nature of sports and political protest, as seen in the display of “Black Power” during the 1968 Olympics and continues today with San Francisco 49ers quarterback Colin Kaepernick and his National Anthem protests today.

Sports can teach so much about the past through individual stories.  Roberto Clemente finishing his career with 3,000 hits is insignificant. What is significant was his paving the way for Latin American ballplayers and the end of his life as the native Puerto Rican was lost in a plane crash while delivering supplies to an earthquake stricken Managua, the capital of Nicaragua on New Year’s Eve 1972. The story of Clemente’s involvement in Latin American affairs is educationally inspiring. The fact he played baseball is an afterthought.

What about gender roles and the impact of the Billie Jean King victory over Bobby Riggs in “The Battle of the Sexes” tennis match in 1973?

Fernando Valenzuela inspired an a generation of Latinos as “Fernandomania” became nationally known and an obsession in the Los Angeles area.  Dodger games went from a mostly white spectator sport to a Mexican media and cultural experience on days Valenzuela pitched.  In 1980 he became the first pitcher to win Rookie of the Year and Cy Young in the same season, yet cultural pride is the real story.  Mexican-Americans in the Southwest hadn’t been so united since the Cesar Chavez protests of the 1960s and never in such fanfare and celebration.

Endless stories continue as Cuban refugees risked their lives to come to the United States to play sports.  Athletes such as Livan Hernandez are not important as much as their story of why they risked their life to ride an unsafe raft to Florida is.

Michael Jordan was cut from his high school basketball team. He never won an NBA championship until the Chicago Bulls drafted and developed talent like Scottie Pippen and they learned the value of teamwork until they figured out how to defeat the Detroit Pistons. He became a global phenomenon.

What kind of society have we evolved into when 19 of the top 20 broadcasts in American History are Super Bowl games?  In recent years, tickets have been sold for $10,000 and advertisers have been willing to pay as much as $5 million for thirty-second commercials during the telecast. So much can be learned, discussed, and debated in the process, from the early ball fields in pastures through the extreme commercialism today and the impact of social media sites such as Twitter and Facebook.

One of my favorite quotes comes from Jackie Robinson. He said, “A life is not important except in the impact it has on other lives.” Sports can teach the lessons we want our children to learn.  As an educator, I know a class like this would be so much more beneficial than one in which focuses on improving a standardized test score or one in which a potential college credit can be earned.

Sports and the stories of individual athletes and teams teach real life skills. Just a few examples include the value of perseverance, setting goals, how hard work yields great rewards, yet there’s always winners and losers.  Not everyone gets a participation trophy in the real world.  Nevertheless, as Babe Ruth once said, “It’s hard to beat a person that never gives up.”  There are ways people learn this important value in life and sports is definitely one of them. 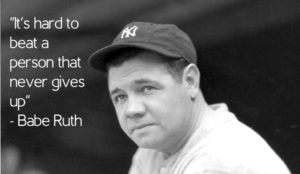 I love sports not just for the games but the valuable life lessons we can learn in the process.

Everyone has heard the saying, “bigger is better.”  This can pertain to having a bigger house, … END_OF_DOCUMENT_TOKEN_TO_BE_REPLACED