You are here: Home / News / Farewell to Jeter 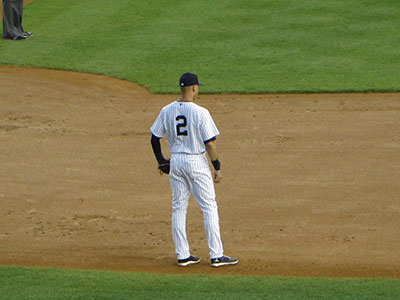 Derek Jeter officially retired just over two weeks ago but his reign in the Bronx has been over for exactly two years as, on October 13, 2012, he broke his ankle in game one of the American League Division Series versus the Detroit Tigers.  Although Jeter did not retire until recently, that day marked the realistic end of his career as a player who consistently helped the Yankees on the field.

Once Jeter broke his ankle in extra-innings versus Detroit in game one, a game the Yankees would lose, the team went on to drop three more games in a row without their Captain and followed that up with their first stretch since last century of the Bronx Bombers not making the play-offs two years in a row.

Jeter only appeared in 17 games the next season hitting .190 in a season derailed by injury, as he never fully recovered from the ankle injury the October before.  A finally healthy Jeter hit .256, with four home runs this past year in 144 games as a member of a Yankees team that finished 84-78.

Although technically the Yankees were an above average team by finishing over .500, Jeter was in unfamiliar territory being on a team that was winning more than it was losing not because of him, but in spite of him.  A shortstop with little power, poor on base percentage, and poor defense, in large part thanks to a sharp decline in range, is not positive production in terms of helping a team win.

In no way is this meant to be an anti-Derek Jeter article.  It’s simply stating what happens to almost all of the greats – they hang on too long and are liabilities toward the end of their careers.

I have heard about some of the all-time greats that I never saw and how they hung on for far too long.  Willie Mays and Babe Ruth come to mind.  You hear stories of Mays, one of the greatest defensive outfielders in the history of the game, embarrassing himself as a member of the New York Mets and even the Great Bambino, Babe Ruth, play out his final days as a member of the Boston Braves.

I have seen countless superstars like Steve Carlton, Ken Griffey, and even my favorite player, Dale Murphy, simply attempt to play long after their skills had eroded to the point of no return.  Few players end their career like Sandy Koufax or former Jeter teammate Mariano Rivera, when they were a clear asset to their team and “The Captain” is no exception to the norm.

There have been many tributes to Jeter in the last month.  Most of them have been, deservedly so, quite complimentary.  However, there has been some aiming to paint him as selfish and self-centered for playing as much as he has this past season.  Some have called him overrated and said that playing on some great Yankees teams have inflated his career stats.

The only thing negative I am going to say is that Jeter has definitely gotten a lot more attention throughout his career and this past season because he does, in fact, play for the New York Yankees.  If he had played his career in Houston, Oakland, Milwaukee, or any other team, there’s no way he would have gotten nearly as much attention as he received this past season.

With that being said, when you finish a career with 3,456 hits, which is good for sixth all-time in the history of baseball, that speaks of undeniable greatness.  Maybe he got more at bats because he played on some great teams.  Maybe he saw better pitches because he was hitting with more men on base than if he’d played on more poor teams or maybe we could come up with some other excuses why he finished with a lifetime .310 career batting average.

Lets just say Jeter was lucky and got an extra 400 hits for some silly reason.  Would that make his detractors happy?  That is essentially two full seasons of great productivity in which he was “lucky.”  Now, if we look at his career without all those “lucky” hits because he played for the Yankees, you are still looking at a player who would have finished with over 3,000 career hits.

Anybody who knows anything about baseball knows that if you have over 3,000 career hits, you’re in prestigious company and are considered a shoe-in for the Hall of Fame.

Pete Rose, Ty Cobb, Hank Aaron, Stan Musial, and Tris Speaker are the only players in the history of baseball with more hits than Jeter.  If you think about all the greats who have played the game, there are some impressive names who rank behind Jeter.  Sometimes the stats do not lie, as much as some may want to rearrange them to support their point of view.

Derek Jeter played his entire career in the spotlight of New York and performed at a high level for many years.  He was also able to keep his name out of the headlines for all the wrong reasons.  Baseball will go on without Jeter, but his accomplishments will never be forgotten by a generation of fans who followed the sport during his career and saw his undeniable greatness.