The Kansas City Royals are storming into the World Series on one of the best and most exciting rolls I have ever seen.  The Wild Card game against the Oakland Athletics pretty much tells all of us what we need to know about these Royals.  As you know, they were trailing 7-3 going into the bottom of the eighth-inning in that game and ended up winning in extras, after Oakland had again retaken the lead in the top of the twelfth.

The excitement continued with fascinating and additional extra-inning games in the division series against Mike Trout and the Los Angeles Angels and carried over into the league championship series where the Baltimore Orioles joined the ranks of the Angels in terms of getting swept by the Royals. 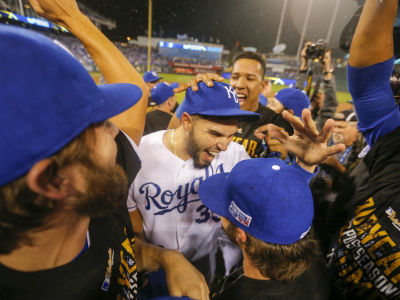 When you see a team play with this type of excitement and passion, it’s most definitely fun to watch.  When you add that to a fan base who hasn’t seen its team in the play-offs for almost three decades, you’ve got something pretty special to follow if you’re a baseball fan that doesn’t bleed the black and orange of the San Francisco Giants.

The last time the Royals were in the play-offs, I was just a kid rooting for John Tudor, Willie McGee, Vince Coleman and the St. Louis Cardinals.  It was just Mom, Dad, and me.  I wasn’t a happy camper watching Don Denkinger miss that obvious call that was a major factor in the Royals defeating the Cardinals in game six either.

Fast forward to the next Royals World Series and I added a sister, lost my Mom, all my grandparents, and am now married to a wonderful wife and have two great kids of my own.  Times have definitely changed but the excitement you see in Kansas City still remains.

One fun aspect of these baseball tours is being around the game and seeing things develop from year to year.  While nobody predicted the incredible ride the Royals are currently enjoying, I think back to a tour we ran back in 2011.  We started the trip with a minor league game in Omaha, Nebraska.  The Royals were celebrated that off-season for their superior farm system, as they easily ranked number one in baseball in terms of prospects in the minors.  I was excited to see some of that young talent before it reached the majors.

Mike Moustakas is the player I’ll never forget from that minor league contest.  I don’t honestly remember if the ball was a home run, bounced off the fence, or if it was caught in deep right-centerfield, but I do remember a particular at-bat from that game where Moustakas crushed the ball and it clearly jumped off of his bat.  I also remember him looking silly against a few lefties and being able to tell that he needed some more time in the minors.

Later on that tour, after having attended a couple of Colorado Rockies games, we found ourselves in Kansas City.  Prior to the season, I was excited about getting to Omaha to see Moustakas, but especially the highest ranked prospect in the Kansas City system in Eric Hosmer.  However, Hosmer has embarassed minor league pitching that spring to the tune of hitting .439 through his first 26 games, which prompted a promotion earlier than expected to the big club.

Hosmer did not disappoint in Kansas City that day, as he crushed a homer during his first at-bat, just missed another later that ended up in a double, and ended up looking like the second coming of George Brett (just at a different corner infield position).

Prior to the game, I had been bragging to a good friend of mine who came on that trip, Adrian Martinez, about how good Hosmer was going to be and both of us even bought shirseys of the Royals first baseman.  He was on track to be one of the next great players in all of baseball.

Things did not come as easily for Hosmer and Moustakas as many predicted, as both have had their ups and downs the past few years, but the Royals have had a certain amount of patience with their youngsters and it’s clearly paying off this October.

Too often in life, teams get in the “win now” mode, as general managers foresake the long-term success of the franchise in order to keep their job for another day and owners, somehow, are too naive or removed from the situation to see what’s really going on.

However, sometimes it takes guts to go out on a limb.  Although the Royals have been patient with some of their blue-chip prospects such as Hosmer and Moustakas, as neither have had the regular season production that many had expected from them a few years ago.

At the same time, they traded another top prospect, Will Myers, in a deal to acquire James Shields from the Tampa Bay Rays almost two years ago.  His staff anchoring ability as the ace has really helped the Royals entire team and his acquisition (along with Wade Davis, who has been lights out in the eighth-inning all season) is one of the main reasons the fall classic will be played in Kansas City this week.

I don’t know about you, but I am going to sit back and enjoy the show between the Kansas City Royals and the San Francisco Giants in my Hosmer shirsey.  May the series be entertaining, last seven games, and may the best team win!