You are here: Home / News / October’s Single Season Best is Hershiser, not Bumgarner

Madison Bumgarner is a good pitcher who has just completed one of the all-time great post-season pitching performances in the history of baseball.  The ace of the San Francisco Giants staff threw over 52-innings while going 4-1 with a microscopic 1.03 ERA this past October.

He upped his game even more in the World Series by going 2-0 and hurling a five-inning save in game seven to lead the Giants to their third title in five years.  The Kansas City Royals only managed one run off Bumgarner in 20 innings of work in the Fall Classic for a miniscule 0.43 ERA.

When you talk about one of the all-time great post-season pitching performances, this definitely makes the list. 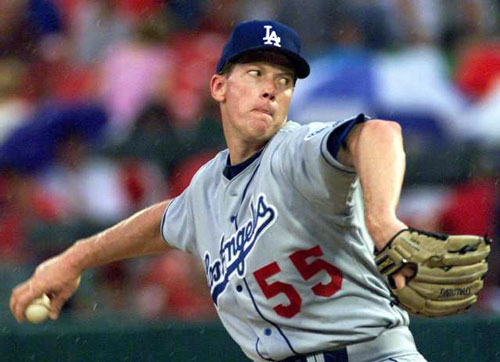 For all of the “greatest of all-time” talk I’ve been hearing since game seven, impressive as it may be, it’s certainly not the best post-season pitching performance I have ever seen.  Some of the writers proclaiming it as such must be too young to remember 1988, as I am too young to have seen Sandy Koufax or Bob Gibson pitch in the World Series in the 1960s.

In the NLCS, Hershiser started three games on the mound and entered another as a reliever, like Bumgarner the other night, and earning a save.  All told he threw over 24-innings against the New York Mets in that championship series and gave up only three runs for an ERA of 1.09.  Unlike Bumgarner, who faced the 23rd ranked offense in baseball a few weeks ago in the NLCS, Hershiser worked his magic against the best offense in the NL that season.

In the World Series, Hershiser won two complete game gems in the five game series in which the Dodgers defeated the heavily favored Oakland A’s.  In game two, after the magical Kirk Gibson home run game the night before, he led the Dodgers to a 2-0 series lead by throwing a three-hit shutout.  In fact, Hershiser had just as many hits that game offensively as the entire A’s team could get off of him, as he went 3-3 with an RBI and a run scored at the plate.

It was Hershiser on the mound in game five when the Fall Classic was clinched, as he led the Dodgers to a 5-2 victory in a contest where he allowed only four hits.  This World Series domination wasn’t accomplished by facing a Royals team that finished in the bottom half of AL teams in terms of runs scored like Bumgarner, it was accomplished by facing an A’s team that was second in all of baseball in terms of runs scored in 1988.

As great as Bumgarner was this October, the highest ranked team offense he faced was the Washington Nationals, who ranked ninth in baseball in runs scored.  He gave up three runs in seven innings against the Nationals for his only loss.

For some reason, it seems that the 1980s is the forgotten decade.  I have written extensively as to why Dale Murphy should be in the Baseball Hall of Fame.  One of my biggest arguments is that he was one of the best, if not the best, player of that decade.  However, due to steroids which led to inflated stats, it’s easier to conveniently forget someone who didn’t cheat to win.

It’s as if most have forgotten many of the great players and performances of the 1980s.